One of the best tools that is available to all users right now in AX is called Task recorder. If you haven't heard of this, you are in for a real treat.

Task recorder is a tool that AX users can use to document a step-by-step process in AX with screenshots and navigation steps. It's not a perfect tool and what it generates may need some cleanup afterwards, but it saves a lot of time when documenting processes and procedures.

I have used Task recorder in AX during my company's implementation (what a life saver!), to create training documents, and to send developers a step-by-step document explaining how end users are executing their jobs. There are a wide array of uses for this kind of technology, but those three are the main uses I have heard of Task recorder being used from other users.


Task recorder is available to all users in the File menu under Tools. 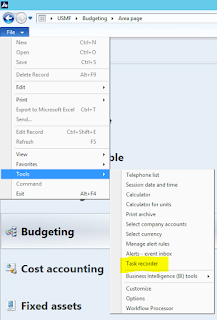 
In AX 2012, when I click on Task recorder, I get a small pop-up that might be missed if I wasn't paying attention.

A document is generated that shows relevant screenshots and gives step-by-step instructions on what you just recorded.

A word of caution - Task recorder will record every click you make, even if you mess up. If you make too many mistakes, it might just be better to start the recording over!


When I click on Task recorder in AX 2012 R3, I am given something that looks a lot different than what I saw before in AX 2012:

If you are someone who loves to be organized, this is a vast improvement over the prior version. Task recorder in AX 2012 R3 allows you to create frameworks with hierarchical nodes for organizing your recordings in an easy to understand fashion. As you can see, in my demo environment, there are several nodes created which break down further into sub-nodes where additional documents can be stored within the framework I have selected.


In order to begin a recording, the framework and node where this recording will reside must be chosen in advance along with the module. You can make this as simple or complex as you want, but if you plan on creating a lot of user documentation using Task recorder, then you may want to consider setting up an organized framework and node structure in advance (In the Settings tab within Task recorder).

Once my node and module are selected, I can now select Start to begin recording. Same as before, once I start recording, every click I make will be recorded. Once I am done, I can select Stop. I can also pause now during my recording, so if I find myself midstream and need to navigate to something else, I can pause and resume later!

Once I am done recording, I can then create a document from my recording in the AX 2012 R3 Task recorder just like in AX 2012.


I have only been able to see Task recorder in the new AX/Dynamics 365 a couple of times in demos, but from what I have seen, Microsoft has taken this tool and made it even better. In the newest versions of AX, Task recorder will actually record your navigation through the system and another user can select that recording and watch you perform the task in AX via your recording! Microsoft has put a lot of effort into making this a great tool, so be sure to check it out!

What have you used Task recorder for? Have you found another use for it outside of the ones I mentioned in this post? If so, post in the comments. I love hearing all of the different ways people use Microsoft Dynamics AX!